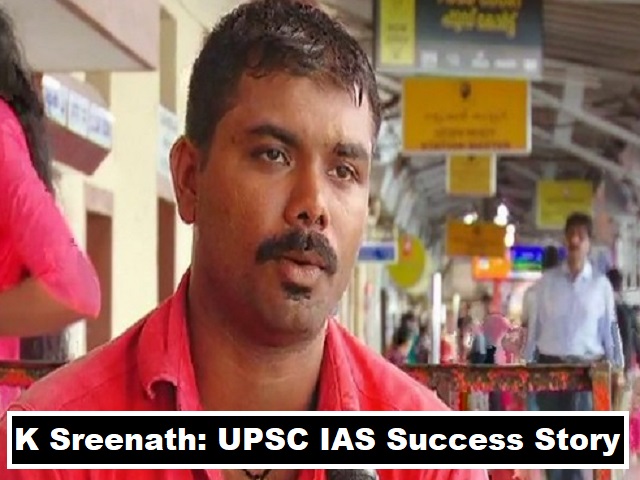 IAS Sreenath K’s life is an inspiration for anyone who wishes to create an opportunity for themselves to achieve their goals and dreams in life. Check the life story of such a coolie of Mumbai Central who became an IAS officer.

Who says mobile phones are demons that have driven the children astray? It cannot even harm adults only if used well. To prove this, we have a coolie who cracked UPSC Civil Services with the aid of only his mobile phone. It was his books, his syllabus, his study material and his practice papers. Take a look at IAS Sreenath K’s success story which is so true yet unbelievable.

Who is IAS Sreenath K?

Sreenath K was a resident of Munnar and worked as a coolie in Ernakulam, Kerala. He is a man of a middle-class family and used to work as a porter on a railway station. He is the sole bread earner for his family.

He had a tough job and a tough life as a young man. He was an authorized porter but at the age of 27 in 2018 he realized that the income of the porter was not sufficient to meet ends with his family. He had a one-year-old daughter at that time who he did not wish to face the perils of life, he had faced. So to give her a good childhood he decided to do better.

He began night shifts to increase his earnings from 400-500 per day to more than that. When even that could not be sufficient, it came across his mind to study for UPSC Civil Services.

He had no money for coaching and tutoring so he decided to use whatever he could afford but he did not give up the idea of ​​becoming a Civil Servant.

How did Sreenath K study for UPSC CSE?

The Government was providing free WiFi by 2016, so Sreenath decided to cash on that. He had a cell phone, a free WiFi connection which made him dream and achieve his goal.

He came to Mumbai Central, where free wifi service was available to people and began his preparation for UPSC Civil Services.

Sreenath spent his money, not on books but an earphone, a memory card, a sim card and a smartphone- Hence began his UPSC preparation.

Sreenath cracked the written exam of Kerala Public Service Exam, KPSC using this technique. Sreenath wished to improve his village and the condition of his family as well. It took him four tries to clear UPSC Civil Services Exam. He worked hard and never gave up. He did not give up his job either. It was not an option for him at all to leave the job of a porter. He cleared Civil Services in his 4t attempt to become an IAS officer.

Sreenath K’s life is an example for many who do not get equal opportunities but wish to create their own lives.

From Patwari to UPSC Topper: This IPS Officer Cracked 12 Government Jobs in 6 Years