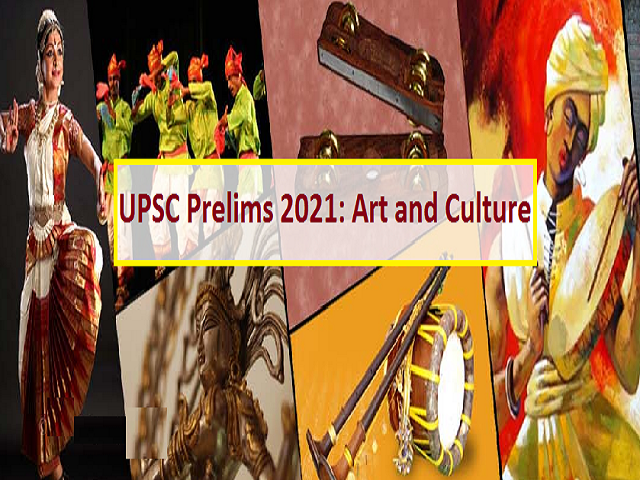 UPSC (IAS) 2021 Prelims: Here we have listed some important topics to study from Art and Culture for end-time revision. The UPSC (IAS) Prelims is to be conducted across India in the coming weekend.

UPSC (IAS) 2021 Prelims: Indian Art and Culture is one of the important topics to study in the Civil Services preparation. Jagran Josh brought various topics in Art and Culture for last-minute revision from the Current Affairs 2020-21. As we know that UPSC CSE 2021 Prelims is to be conducted on October 10, 2021.

Here is the list of important topics from art and culture which should be revised and are in news for the last one year and questions are expected from them.

– World’s oldest known cave painting that was painted at least 45,500 years ago was found in the limestone cave of Leang Tedongnge, Indonesia.
– It was uncovered in South Sulawesi and consists of a life-sized depiction of a warty pig.
– Earlier, the oldest dated rock art ‘scene’ was at least 43,900 years old. It consists of a depiction of hybrid human-animal beings hunting Sulawesi warty pigs and dwarf bovids.
– The earliest paintings in India have been reported from Upper Paleolithic times.
– These are the manifestations of the cognitive development of the hominins.
– In 1867-68, the first discovery of rock paintings was made in India by Archibold Carlleyle at Sohagihat in Mirzapur, Uttar Pradesh.

– Native language and mother tongue are used interchangeably generally.
– Native language or the first language is the language of the area the person grows up in. The child acquires language either through schooling or socialization like a family.
– Mother tongue is the in-born language.
– In multilingual families, the home language is spoken by other family members that may sometimes be different from the mother tongue or local language.
– The 2019 year was announced as the ‘Year of International Mother Tongue Conservation’ by the United Nations.
– As per the UN, every two weeks a language disappears taking with it an entire cultural and intellectual heritage.

– Sivasagar’s Jerenga Pothar in Assam has historical significance related to the Ahom Kingdom.
– Sivasagar, earlier known as Rangpur was the seat of the powerful Ahom dynasty. It ruled Assam for six centuries (1228-1826).
– Jerenga Pothar was in Sivasagar town was connected to the valor of 17th century Ahom princess Joymoti. She was the wife of the Ahom prince Gadapani.
– Ahoms migrated to the Brahmaputra valley from present-day Myanmar.
– It was founded by the first Ahom king Chao Lung Sui-Kha-Pah in the 13th-century.
– The society of Ahom was divided into clans or games who controlled several villages.

The candidates can download their UPSC Admit Card from the link shared here.

– Kakatiya Rudreswara Temple also called the Ramappa Temple and Dholavira has been inscribed on UNESCO’s World Heritage list.
– The first site to get the tag in India was Dholavira of the ancient Indus Valley Civilization (IVC).
– Liverpool (UK) was removed from the World Heritage List.
– UNESCO’s ‘Historic Urban Landscape Project (HULP)’, for Gwalior and Orchha cities (Madhya Pradesh) was launched.

– Gurdwara Reform movement or Akali Movement was Sikh’s long-drawn campaign between 1920-25 for the liberation of their gurdwaras.
– It was an offshoot of the Singh Sabha Movement.
– The worship places of Sikhs were transferred and given to the Udasi Mahants by the Britishers.
– Gurdwara was public property, claimed by the Sikhs and hence the public could remove mahants.
– Events related to the Gurdwara Reform Movement include the formation of the Shiromani Gurdwara Parbandhak Committee (SGPC), Nankana Sahib Massacre, etc.

– Malabar Rebellion leaders including Variamkunnath Kunhamed Haji, Ali Musaliar, and 387 other “Moplah martyrs” will be removed from the Dictionary of Martyrs of India’s Freedom Struggle.
– The recommendations were made by a three-member panel.
– The entries were reviewed by a three-member panel in the fifth volume of the dictionary brought out by the Indian Council for Historical Research (ICHR).
– It was felt that the rebellion of 1921 was never a part of the independence struggle but a fundamentalist movement.
– Concluded that Haji was a rioter who established a Sharia court and a large number of “Moplah martyrs” who were under trial prisoners died due to diseases like cholera and natural causes and so cannot be treated as martyrs.
– Malabar Rebellion, also called the Moplah riots.
– It was an armed uprising of Muslim tenants against British rulers and local Hindu landlords in 1921.

– Reclining Buddha, India’s largest statue is being installed at the Buddha International Welfare Mission temple in Bodh Gaya.
– The statue represents the Buddha during his last illness that is about to enter Parinirvana.
– The statue shows Buddha lying on his right side, his head resting on a cushion or on his right elbow.
– It means that all human beings have the potential to be awakened and be released from the cycle of death and rebirth.
– The Reclining Buddha was first depicted in Gandhara art.

How to Read NCERT Books for UPSC Syllabus Preparation? Expert Suggest To Continue Preparation Without Waiting for UPSC Result 2021