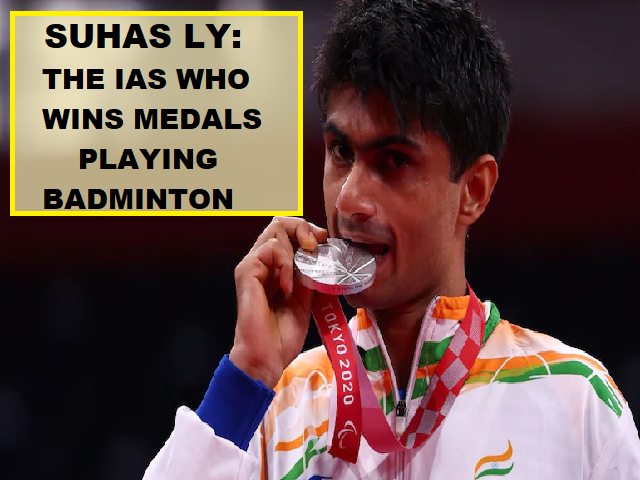 Suhas Yathiraj is an IAS officer who cracked UPSC Civil Services Exam but is also a Silver Medalist at Tokyo Paralympics in Badminton. Know more about him below.

Many would come and tell you to qualify UPSC Civil Services to become an IAS and your life will be set. However, there is one IAS officer who lives a life larger than this and has defied all these myths. He says the fire within should never dim. Suhas Lalinakere Yathiraj is one such IAS officer who showed the world that civil services are his job and playing badminton is his passion. This officer became the first Indian Civil Servant to win a silver medal at Tokyo Paralympics 2020. Let us know all about his management and his life below.

UPSC Civil Services Mains exam is being conducted from January 7-16, 2022.

Suhas LY is currently the district magistrate of Gautam Buddh Nagar, which is commonly called Noida. He won the silver medal in Paralympics 2020 held in Tokyo in Men’s Singles- Badminton. He is India’s first-ever Civil Servant to do so,

Suhas won the Bronze medal as well in the 2018 Asian Paralympics and has big plans for Paris 2024 as well.

Suhas grew up in Karnataka. His father had a transferable job so the family used to shift locations as per the necessity of the job. As he said to Times of India in an interview, “During our youthful days we did not know what to do. First of all, to get into school, then a good college. It was a challenge.”

He also said growing he only focused on getting good marks in his finals, getting admitted into the best schools.

He got into the National Institute of Technology, Karnataka and chose Computer Science as his field of study. So in short Suhas Yathiraj is a computers engineer as well.

His dreams began there as a young boy from a remote place in Karnataka qualified to study in the biggest college in the state.

Suhas LY: How did the Badminton Career Begin?

Suhas saw his father play badminton as a child. He lost his father in 2005 and became an IAS Officer in 2006. Badminton was a prominent sport in South India in those days. He also started playing this sport in his college and started taking it seriously. Ball badminton was his port and his passion. It was in 2016 when he was inaugurating a badminton tournament in Azamgarh, he played some games and defeated some state-level players. The coach there asked him to try his hand at the international level which he agreed somehow to do.

He entered the Beijing Asian Championship as an unseeded player and went on to win the gold medal. He won the Gold Medal at Jakarta Aian Para Games in 2018 and a Silver in Tokyo Paralympics.

Suhas LY: What Keeps Him Motivated?

Suhas when asked what keeps him on said, “Badminton is like meditation to me.” He said that his job was quite challenging and required late night working as well. Even during the preparation of UPSC, he used to work in an MNC and at night used to study. He proved all those wrong who said one who can study cannot play. He can do both, and very well too. His mantra is to enjoy the present whenever and wherever he is. In the court, he is enjoying his game and in the office, he is an administrative officer. He believes in hard work and smart work.

Suhaas’s daily routine involves working from 8:30 in the morning to late night till 9or 10:00 PM. He does not miss playing a game even then. Such is his passion. It has been wisely said that one needs to plan to succeed. We all must acknowledge his panning skills at least.