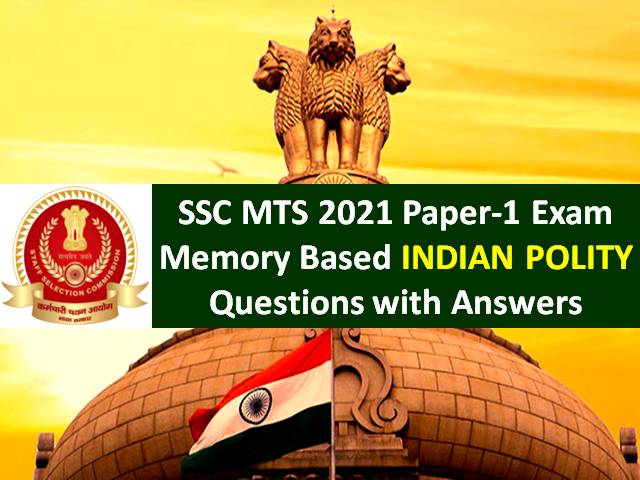 SSC MTS 2021 Exam Memory Based Questions: The Staff Selection Commission (SSC) is holding the SSC MTS 2020-21 Paper-1 from 5th October to 2nd November 2021 in online mode. So for the ease of candidates, we are going to share memory-based Indian Polity (GA/GK/Current Affairs) questions with answers as per the feedback received by the candidates who have appeared in SSC MTS Paper-1 2021 Exam. Candidates are advised to definitely cover these questions to score high marks in the Exam.

Let’s have a look at the Important Indian Polity (GA/GK/Current Affairs) Questions that are being covered in the SSC MTS 2021 Paper-1 Exam:

1. Can a Governor pass an ordinance?

Answer: The Governor of a state can issue ordinances under Article 213 of the Constitution when the state legislative assembly (or either of the two Houses in states with bicameral legislatures) is not in session. The ordinance-making power is the most important legislative power of the President and the Governor.

Answer: The main objectives of the Tenth Five-Year Plan: Attain 8% GDP growth per year. Reduction of poverty rate by 5% by 2007. Providing gainful and high-quality employment at least to the addition to the labor force.

4. Constitution Day is celebrated on:

5. Citizenship is part of which article of the Indian Constitution?

Answer: Part II of the Constitution of India (Articles 5-11) deals with the Citizenship of India.

6. Right to Religion is part of which article of the Indian Constitution?

Answer: Article 25 says “all persons are equally entitled to freedom of conscience and the right to freely profess, practice, and propagate religion subject to public order, morality, and health.”

Answer: The British had separated the Railway Budget in 1924 as a major part of the government revenues and the country’s Gross Domestic Product (GDP).

8. When the Indian National Flag was officially recognized?

Answer: The National Flag of India was adopted in its present form during an ad hoc meeting of the Constituent Assembly held on 22 July 1947, a few days before India’s independence from the British on 15 August 1947.

9. ‘One school one IAS’ scheme started in:

Answer: On 16 January 2021, the Governor of Kerala, Arif Mohammad Khan officially launched the ‘One School One IAS’ program.

10. Who is the current Sports Minister?

Answer: Anurag Thakur is the current Minister of Youth Affairs and Sports.

Answer: Key functions of RBI are, banker’s bank, the custodian of the foreign reserve, controller of credit, and managing printing and supply of currency notes in the country.

12. Who is the Brand Ambassador for COVID-19 Vaccine in Punjab?

Answer: Sonu Sood has been made the brand ambassador for Punjab’s covid vaccination programme.

13. Coins on which star has been made:

Answer: Coins with a star, split diamond or dot in diamond symbols below the year signify that they are from Hyderabad mint. The mint was set up in the year 1903 by the then government of the Nizam, Hyderabad.