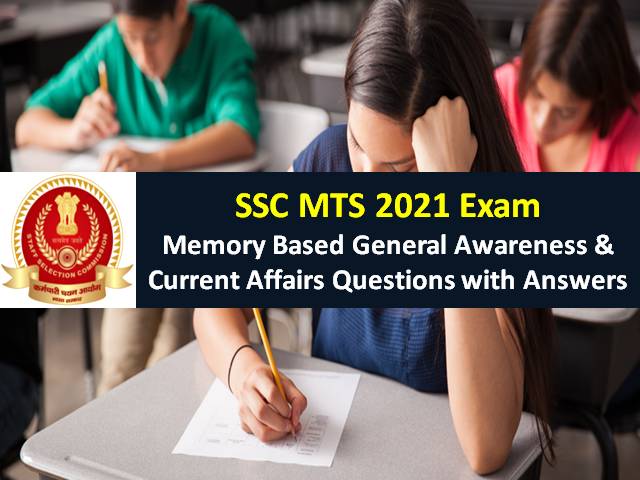 SSC MTS 2021 Exam Memory Based Paper: SSC MTS Paper-1 2021 Computer Based Exam (CBE) has been started from 5th October 2021 and will be conducted till 20th October 2021. In this article, we are going to share the important Memory Based General Awareness & Current Affairs Questions as per the feedback shared by the candidates who have appeared for SSC MTS 2021 Exam. Candidates are advised to definitely cover these questions for scoring high marks in the Exam.

Let’s have a look at the General Awareness & Current Affairs Questions that are being covered in the SSC MTS Paper-1 2021 Exam:

1. When the Indian National Flag was officially recognized?

Answer: The National Flag of India was adopted in its present form during an ad hoc meeting of the Constituent Assembly held on 22 July 1947, a few days before India’s independence from the British on 15 August, 1947.

2. Uttar Pradesh shares its border with how many states:

Answer: Uttar Pradesh shares its national border with nine different states, ie, Uttarakhand to its north; Himachal Pradesh, Haryana, and Delhi to its north-west; Rajasthan to its west; Madhya Pradesh and Chhattisgarh on the south; Jharkhand to the south-east and Bihar to its east.

6. ‘One school one IAS’ scheme started in:

Answer: On 16 January 2021, the Governor of Kerala, Arif Mohammad Khan officially launched the ‘One School One IAS’ program.

8. Matki Dance is associated with which state?

Answer: Matki is performed by women of the Malwa region on the wedding and festival of Madhya Pradesh.

9. World’s largest floating solar plant is going to be constructed on which river?

Answer: The world’s largest solar power plant with 600 MW capacity is being set up on Omkareshwar Dam on Narmada river in Madhya Pradesh.

10. Neeraj Chopra is the brand ambassador of:

12. Where is the Sugarcane Manufacturing Center?

14. Javelin Day is celebrated on:

15. The newest peak of the Himalayas

17. Battle of Plassey was fought in which year?

18. Who is the current Sports Minister?

Answer: Anurag Thakur is the current Minister of Youth Affairs and Sports

19. Nawab of Bengal during Battle of Plassey:

Answer: The Battle of Plassey was fought in north-eastern India on 23 June 1757. Troops of the British East India Company, led by Robert Clive, came up against the forces of Siraj-ud-Daulah, the last Nawab of Bengal, and his French allies.

20. The number of moles in molar mass:

21. Vitamin C is present in the highest amount?

Answer: Guava (amongst the options)

22. The chemical name of Vitamin C:

23. Bromine is which type of chemical element?

Answer: Bromine, a chemical element, a deep red noxious liquid, and a member of the halogen elements, or Group 17 of the periodic table. Bromine is a naturally occurring element that is a liquid at room temperature. It has a brownish-red color with a bleach-like odor, and it dissolves in water.

Answer: Key functions of RBI are, banker’s bank, the custodian of the foreign reserve, controller of credit, and managing printing and supply of currency notes in the country.

26. Difference between DNA and RNA:

27. Who is the father of bacteriology?