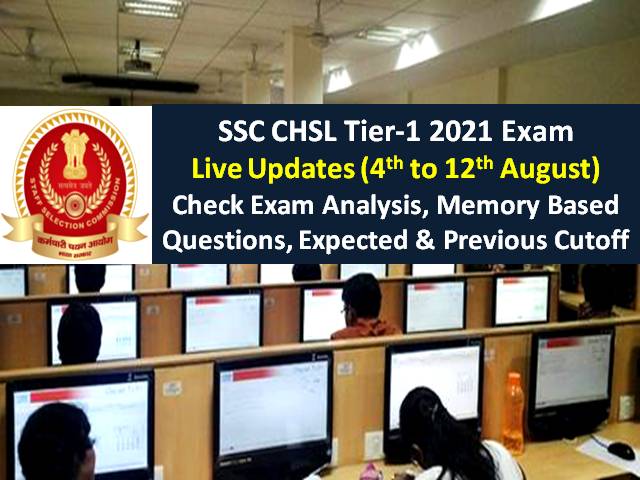 SSC CHSL 2021 Exam Updates (4th August): Staff Selection Commission (SSC) will resume SSC CHSL Tier-1 2020-21 Exam from tomorrow, ie, 4th August 2021. The online exam was conducted earlier this year from 12th to 19th April 2021. Due to COVID-19 Pandemic, the exam got postponed and is now scheduled to be conducted from 4th to 12th August for leftover candidates.

Candidates need to carry the below items at exam centers:

(c) At least one valid photo-bearing identity proof in ORIGINAL along with Photocopy. If the Photo Identity Card does not contain the complete Date of Birth, then the candidate must carry an additional original document having the Date of Birth as printed on the Admit Card.

We will provide a detailed exam analysis once the first shift gets over.

We will provide the memory-based questions with answers once the first shift gets over.

SSC CHSL 2020-21 Tier-I exam is an Objective Multiple Choice Exam that will be conducted in online mode for 1 Hour. The exam consists of four sections having 100 questions (25 questions in each section) of 200 marks (maximum 50 marks in each section)

Will there be a negative marking for wrong answers in SSC CHSL Tier-1 2021 Exam?

In which medium of language SSC CHSL 2021 exam will be conducted?

Tier-1: The exam will be conducted in both Hindi & English languages ​​except the English Language and Comprehension section.

Will there be a Sectional Cutoff in SSC CHSL 2021 Exam?

No, there will be no sectional cut-off in the exam.

How many vacancies have been announced under SSC CHSL 2021 Recruitment?