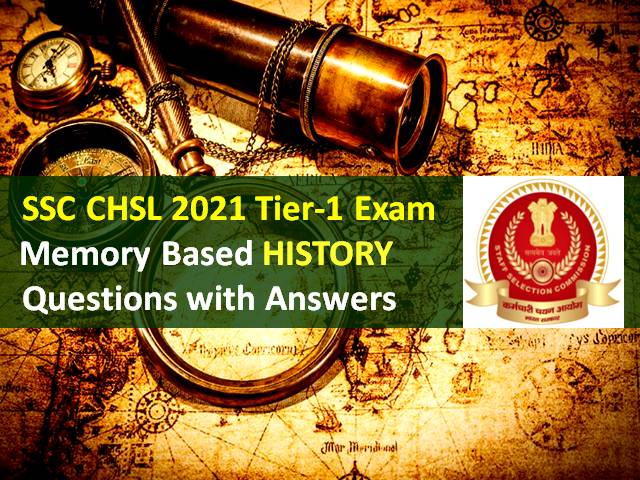 SSC CHSL 2021 Exam from 4th to 12th August: Staff Selection Commission held the Tier-1 Combined Higher Secondary Level (CHSL) 2020 Exam from 12th to 19th April 2021 in online mode across India except in West Bengal Exam Centers due to elections. However, the exam got postponed due to the COVID-19 Surge across the country and now the Commission will conduct the exam for the remaining candidates from 4th to 12th August 2021.

So for the ease of leftover candidates, we are going to provide some important memory-based History questions with answers compiled from the feedback shared by the candidates who earlier appeared in the Exam.

Let’s have a look at the important History Questions that are being covered in the SSC CHSL 2021 Tier-1 Exam:

1. Who is the founder of Khalsa Panth?

2. Who was the first country to issue banknotes?

Answer: China – The Song dynasty was the first to issue real paper money in 1023 and the most famous Chinese issuer was Kublai Khan, a Mongol leader, in the 13th century.

Answer: 26 March 1971 – 16 December 1971 – The Bangladesh Liberation War, also known as the Bangladesh War of Independence, or simply the Liberation War in Bangladesh, was a revolution and armed conflict sparked by the rise of the Bengali nationalist and self-determination movement in what was then East Pakistan during the 1971 Bangladesh genocide.

4. Gateway of India was built in honor of:

5. Which leader led the revolt of 1857 from Northeast India?

6. Rajya Sabha was founded in which year?

Answer: 1917 – Mahatma Gandhi had visited Bihar for the first time and held a meeting on April 10, 1917, for farmers engaged in forced indigo farming. He later launched an agitation known as Champaran Satyagraha.

8. Who is known as the Grand Old Man of India?

Answer: Dadabhai Naoroji was called Grand Old man of India due to his activities in the Indian national movement for 6 decades.

Answer: Gopala – Pala dynasty, ruling dynasty in Bihar and Bengal, India, from the 8th to the 12th century. Its founder, Gopala, was a local chieftain who rose to power in the mid-8th century during a period of anarchy.

Answer: Samudragupta (335-375 AD) of the Gupta dynasty is known as the Napoleon of India. Historian AV Smith called him so because of his great military conquests known from the ‘Prayag Prashati’ written by his courtier and poet Harisena, who also describes him as the hero of a hundred battles.